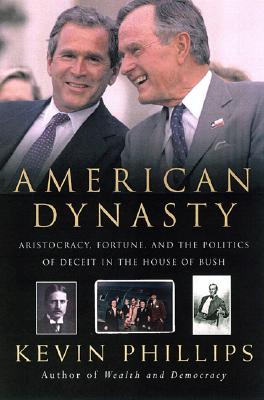 American Dynasty: Aristocracy, Fortune and the Politics of Deceit in the House of Bush

Close to new, slight dampness stain on inside of jacket at foot of spine. No markings. A penetrating look at the Bush presidents and their ties to the Saudi royal family.

The Bushes are the family nobody really knows, says Kevin Phillips. This popular lack of acquaintance?nurtured by gauzy imagery of Maine summer cottages, gray-haired national grandmothers, July Fourth sparklers, and cowboy boots?has let national politics create a dynasticized presidency that would have horrified America's founding fathers. They, after all, had led a revolution against a succession of royal Georges.

In this devastating book, onetime Republican strategist Phillips reveals how four generations of Bushes have ascended the ladder of national power since World War One, becoming entrenched within the American establishment?Yale, Wall Street, the Senate, the CIA, the vice presidency, and the presidency?through a recurrent flair for old-boy networking, national security involvement, and political deception. By uncovering relationships and connecting facts with new clarity, Phillips comes to a stunning conclusion: The Bush family has systematically used its financial and social empire?its ?aristocracy to gain the White House, thereby subverting the very core of American democracy. In their ambition, the Bushes ultimately reinvented themselves with brilliant timing, twisting and turning from silver spoon Yankees to born-again evangelical Texans. As America?and the world?holds its breath for the 2004 presidential election, "American Dynasty" explains how it happened and what it all means.

Title: American Dynasty: Aristocracy, Fortune and the Politics of Deceit in the House of Bush

American Dynasty: Aristocracy, Fortune and the Politics of Deceit in the House of Bush