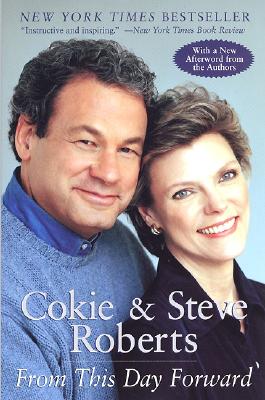 From This Day Forward

360 pp. Close to new but midsection curled. new, Inscribed "To Mary Jane" by both authors on title page. Name of previous owner, a Daytona Beach newspaper writer, is on endpaper. No other markings. The husband and wife journalist pair discuss how they made their marriage work despite pressures of careers, differing faiths, etc. They also look at marriages of other prominent and everyday Americans.

After thirty years together, Cokie and Steve Roberts know something about marriage and after thirty distinguished years in journalism, they know how to write about it.In From This Day Forward, Cokie and Steve weave their personal stories of matrimony into a wider reflection on the state of marriage in American today.

Here they write with the same conversational style that catapulted Cokie's We Are Our Mother's Daughters to the top of the New York Times bestseller list. They ruminate on their early worries about their different faiths -- she's Catholic, he's Jewish -- and describe their wedding day at Cokie's childhood home. They discuss the struggle to balance careers and parenthood, and how they compromise when they disagree. They also tell the stories of other American marriages: that of John and Abigail Adams, and those pioneers, slaves and immigrants. They offer stories of broken marriages as well, of contemporary families living through the "divorce revolution." Taken together, these tales reveal the special nature of the wedding bond in America. Wise and funny, this book is more than an endearing chronicle of a loving marriage -- it is a story of all husbands and wives, and how they support and strengthen each other.

Title: From This Day Forward

From This Day Forward