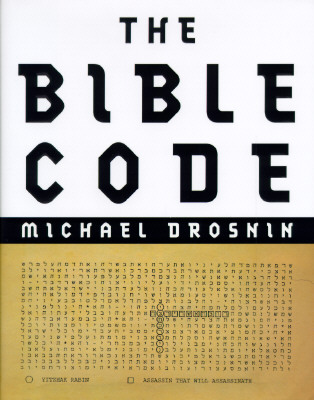 233 pp. Inscription on front endpaper, otherwise no markings. Faint outline of a coffee spot on rear panel of dust jacket, slight chipping. A Biblical code discovered by Israeli mathemetician Eliyahu Rips and his colleagues in 1994 is presented in layman's terms by an investigative reporter. The code is a series of Hebrew words that can be found in the first 5 books of the Old Testament. Drosnin said he became a believer in the code after he warned Yitzhak Rabin of a foretold assassination a year before Rabin's murder occurred. An appendix gives the text of the 1994 Statistical Science paper that presented the code hypothesis to the scientific community. Size: 8vo - over 7" - 9" tall

For three thousand years a code in the Bible has remained hidden. Now it has been unlocked by computer -- and it may reveal our future.

The code was broken by an Israeli mathematician, who presented the proof in a major science journal, and it has been confirmed by famous mathematicians around the world.

This book is the first full account of a scientific discovery that may change the world, told by a skeptical secular reporter who became part of the story.

The three-thousand-year-old Bible code foretells events that happened thousands of years after the Bible was written. It foresaw both Kennedy assassinations, the Oklahoma City bombing, the election of Bill Clinton -- everything from World War II to Watergate, from the Holocaust to Hiroshima, from the Moon landing to the collision of a comet with Jupiter.

In a few dramatic cases detailed predictions were found in advance -- and the events then happened exactly as predicted. The date the Gulf War would begin was found weeks before the war started. The date of the Jupiter collision was found months before the blast.

The author of this book, investigative reporter Michael Drosnin, himself found the assassination of Yitzhak Rabin predicted in the Bible more than a year before the murder -- and personally warned the Prime Minister.

After the assassination happened, as predicted, when predicted, he was asked to brief the new Prime Minister of Israel and the chief of its famed intelligence agency, the Mossad.

The book is based on Drosnin's five-year investigation. The author interviewed all the experts, here and abroad. He spent many weeks with the world-class mathematician who discovered the code, Dr. Eliyahu Rips,and he met with famous mathematicians at Harvard, Yale, and Hebrew University. He talked to a senior code breaker at the top secret U.S. National Security Agency, who confirmed that there is a code in the Bible that does reveal the future.

No one yet knows if the Bible code accurately foretells what is yet to come. But the code may be a warning to this world of unprecedented danger, perhaps the real Apocalypse, a nuclear World War.

In any event, the Bible code forces us to accept what the Bible itself can only ask us to believe -- that we are not alone.

And it raises a question for us all -- does the code describe an inevitable future, or a series of possible futures whose ultimate outcome we can still decide?