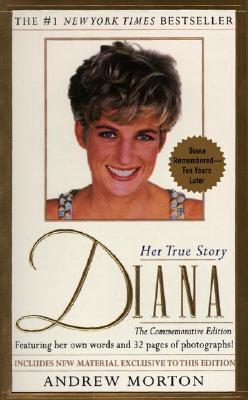 The sudden and tragic death of Princess Diana has caused the entire world to reflect on how much this singular woman meant to us all. From her fairy-tale courtship, her wedding to Prince Charles, and the birth of her two wonderful boys to the stunning collapse of her marriage and the revelation of her psychological and physical trauma, we witnessed and shared in the wide range of emotions in her life. In the last few years, Diana's dedication to the downtrodden and unloved and her commitment as a mother have only strengthened her hold on our hearts.

When "Diana: Her True Story" was initially published in 1992, it was met with a hail of abuse from the British Establishment. As time passed, however, the magnitude of Diana's marital and personal distress made it clear, even to the greatest doubters, that this book was indeed Diana's true story; and finally, in 1995, she revealed in a BBC interview that she had indirectly cooperated with Andrew Morton.

What has not been known, however, until the publication of this new edition, is that "Diana: Her True Story" was in fact almost entirely based on her own words, supplemented by interviews with her friends. In 1991 and 1992, when this book was first conceived and written, Diana felt trapped and powerless within the royal family. She knew that the truth about her life was submerged under a mountain of royal propaganda. "Diana: Her True Story" chronicles Diana's unhappiness, which began shortly before her wedding day, and reveals the life of a young and beautiful woman who, trapped in a loveless marriage, had sunk to the depths of despair; from which recovery seemed impossible. In an act of desperation, she made the decision in 1991 totell her own story, no matter what the cost. And so she and Andrew Morton began a collaboration that was to shake the royal family to its foundations and, eventually, force Diana to seek a new life. Tragically, that new, and briefly happy, life is over.

This new edition contains the story of how the book first came into being. What's more, Diana is able, finally, to tell her own story, in her own words. Its pages contain her own testament -- the closest we will ever come to her autobiography.

Description: 280 pp., with approx. 40 pp. color photos, 6 pp. b&w photos. Subtitle: A Commemorative Edition with new material including her own words. Morton, the British journalist whose original biography of Diana rocked the Royal Family, gives an updated version following Diana's death, including material detailing how she collaborated with him in his earlier research. Also a 46 pp. section purporting to be Diana's own commentary. Photos high quality. Size: 8vo - over 7¾" - 9¾" tall