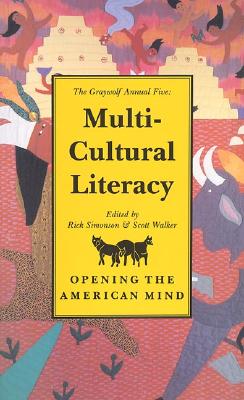 188 pp. A collection of 13 essays about ways to structure education to recognize the diversity of the American population. Contributors include James Baldwinn, Carlos Fuentes, Michelle Cliff, Wendell Berry and others. Includes a checklist of terms and titles that test one's multicultural literacy.

The issue of cultural literacy has been the subject of intense debate in the past two years. Several bestselling books about the deficiencies of our educational system as well as changes in basic curriculum at more than one major university have contributed to the fervor of this debate.

Fueling the national controversy is the question of what body of knowledge constitutes cultural literacy. While many argue for a return to a "back to basics" curriculum, equally energetic voices call for a revised curriculum, one which embraces both traditional western classics and the classics of non-European cultures, among them African, Asian, and Latin American.

This volume brings together thirteen essays which suggest the range of knowledge truly literate individuals need to possess. Essays by such writers as James Baldwin, Carlos Fuentes, Michelle Cliff, Paula Gunn Allen, Ishmael Reed, and Wendell Berry enlarge our perspective to include a variety of voices and heritages which contribute to the vibrant culture of the United States.

Also included is a beginning list of names, places, dates, and concepts which are part and parcel of a multi-cultural fabric.