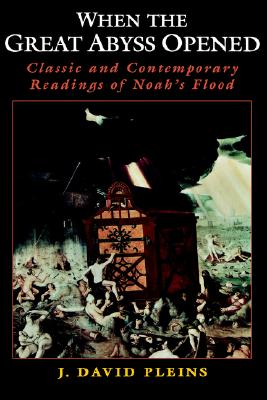 When the Great Abyss Opened: Classic and Contemporary Readings of Noah's Flood

Tight, as new, slight soil to front endpapers. Out of print mark on bottom edge. No other markings. Glossy color boardsCollection of 10 essays, scholarly but readable, plus extensive notes, bibliography and index on the Great Flood myth.

The story of Noah's flood is one of the best-loved and most often retold biblical tales, the inspiration for numerous children's books and toys, novels, and even films. Whether as allusion, archetype, or literal presence--the American landscape is peppered with "recreations" of the ark--the story of Noah's animals and the ark resonates throughout American culture and the world.

While most think of Noah's ark as a dramatic myth, others are consumed by the quest for geological and archeological proof that the flood really occurred. Persistent rumors of a large vessel on the mountain of Ararat in Turkey, for instance, have led many pilgrims and explorers over the centuries to visit that fabled peak. Recent finds suggest that there may have been a catastrophic flood on the shores of the Black Sea some 7,600 years ago. Is this then the reality behind the ancient tale of Noah? More to the point, why does it matter? What does the story of the Flood mean to us and why does it so stir the collective imagination? When the Great Abyss Opened examines the history of our attempts to understand the Flood, from medieval Jewish and Christian speculation about the physical details of the ark to contemporary efforts to link it to scientific findings. Unraveling the mythical dimensions of the parallel Mesopotamian flood stories and their deeper social and psychological significance, J. David Pleins also considers the story's positive uses in theology and moral instruction. Noah's tale, however, has also been invoked as a means of justifying exclusion, racism, and anti-homosexual views. Pro-slavery advocates, for example, used the story of Noah's Curse on Ham's son Canaan to rationalize the enslavement of Africans. Throughout this expansive and lively book, Pleins sheds new light on our continuing attempts to understand this ancient primal myth. Noah's Flood, he contends, offers a unique case study that illuminates the timeless and timely question of how fact and faith relate.

Title: When the Great Abyss Opened: Classic and Contemporary Readings of Noah's Flood

When the Great Abyss Opened: Classic and Contemporary Readings of Noah's Flood