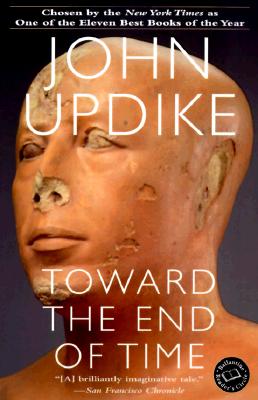 Toward the End of Time

Set in the near future of 2020, this disconcerting philosophical fantasy""depicts an America devastated by a war with China that has left its populace decimated, its government a shambles, and its natural resources tainted. The hero is Ben Turnbull, a sixty-six-year-old retired investment counselor, who, like Thoreau, sticks close to home and traces the course of one Massachusetts year in his journal. Something of a science buff, he finds that his disrupted personal history has been warped by the disjunctions and vagaries of the "many-worlds" hypothesis derived from the indeterminacy of quantum theory. His identity branches into variants extending back through the past and forward into the evolution of the universe, as both it and his own mortal, nature-haunted existence move toward the end of time.

Title: Toward the End of Time

Description: Lightly read, no markings, spine uncreased. Updike gives us a 66-year-old man thinking about death, the past, the future, the trends of U.S. culture. NY Times calls it "Walden gone haywire."

Toward the End of Time