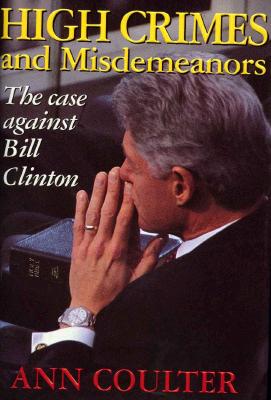 High Crimes and Misdemeanors: The Case Against Bill Clinton

Nearly new. Previous owner's address label on inside of front cover. No markings. Conservative commentator Ann Coulter lays out the case for impeaching Bill Clinton. She examines not only the Lewinsky affair and his perjury, but several other scandals that tarnished his presidency, including Filegate, Whitewater, the Paula Jones lawsuit, the Vince Foster death and his fundraising techniques. A 34-page compendium of reference notes provides her sourcing. Ultimately Clinton was impeached but acquitted by the Senate.

In this "New York Times" bestseller, Coulter mercilessly pillories Clinton and examines the abuses and excesses of Bill Clinton point by point. She also shreds every conceivable defense the Clintons to bits as she probes the major Clinton scandals, including Monica, Filegate, the China connection, the travel office snafu, and the fundraising fiascos.

Title: High Crimes and Misdemeanors: The Case Against Bill Clinton

High Crimes and Misdemeanors: The Case Against Bill Clinton