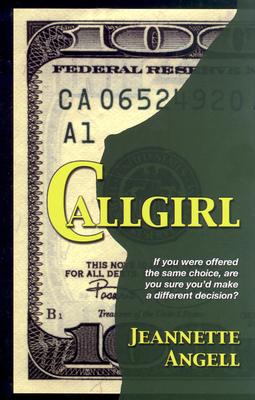 Close to new, lightly read, no markings in text. Light thumbing. A university instructor tells of moonlighting as a callgirl after she is deserted by her boyfriend and needs extra cash.

Jeanette Angell, born in Angers, France to a French father and an American mother, received the French baccalaureat A and a bachelors degree from the Universite Catholique de L'Ouest. Coming to the United States at age 21, she earned four additional degrees--including a Master of Divinity from Yale--before finishing with a PhD from Boston University. She taught undergraduate and continuing education courses in history, sociology, religion, and anthropology for a number of years at institutions such as Harvard, M.I.T. and the London School of Economics. When she was 34, a live-in boyfriend vanished, wiping out her savings account and leaving her in precarious financial straits. Reading an advertisement seeking women to work as escorts, she thought this might offer a way out of penury. Answering the ad led her to a dual career for several years: university lecturer by day and callgirl by night. This book is her story of those three years, motivated largely because of the misconceptions Jeannette observed about prostitution, and because she was touched by--and wanted to give something back to--the many women she met in that world who are invisible to the rest of us. For the past ten years she's had one career only: writing and editing. Her previous books include four novels: Legende, Wings, Flight, and The Illusionist. She also writes articles for a number of consumer magazines, professional journals, and corporate publications. She lives in Boston with her husband, stepchildren, and cats, and is currently working on her next novel.