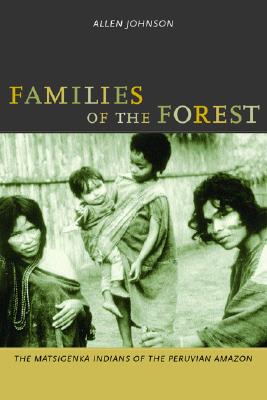 Families of the Forest

Nearly new, lightly thumbed, bookstore labels on spine and rear cover, minor crinkling of acetate on front cover near fore edge. Text clean. Inlcudes several b&w photos, bibliography, glossary, reference notes, index. A UCLA anthropologist summarizes his 1971-1980 field research on the Matsigenka Indians in Shimaa, an Amazon settlement in southeastern Peru. The people are also known as Machiguenga Indians -- Johnson uses spelling that is closest to his subjects' own language. Johnson says the 20 families he studied are best understood as a family-based society with little loyalty to any larger group -- i.e., they are not a village, tribe or a caste.

The idea of a family level society, discussed and disputed by anthropologists for nearly half a century, assumes moving, breathing form in "Families of the Forest." According to Allen Johnson's deft ethnography, the Matsigenka people of southeastern Peru cannot be understood or appreciated "except" as a family level society; the family level of sociocultural integration is for them a lived reality. Under ordinary circumstances, the largest social units are individual households or small extended-family hamlets. In the absence of such "tribal" features as villages, territorial defense and warfare, local or regional leaders, and public ceremonials, these people put a premium on economic self-reliance, control of aggression within intimate family settings, and freedom to believe and act in their own perceived self-interest.
Johnson shows how the Matsigenka, whose home is the Amazon rainforest, are able to meet virtually all their material needs with the skills and labor available to the individual household. They try to raise their children to be independent and self-reliant, yet in control of their emotional, impulsive natures, so that they can get along in intimate, cooperative living groups. Their belief that self-centered impulsiveness is dangerous and self-control is fulfilling anchors their moral framework, which is expressed in abundant stories and myths. Although, as Johnson points out, such people are often described in negative terms as lacking in features of social and cultural complexity, he finds their small-community lifestyle efficient, rewarding, and very well adapted to their environment.

Title: Families of the Forest

Families of the Forest